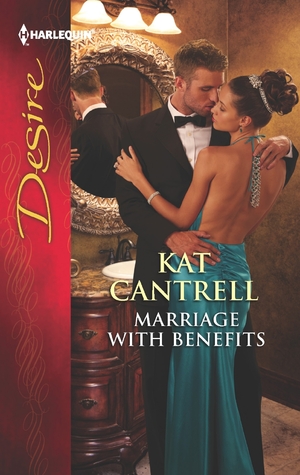 Told you I was coming back with some books and reviews!
Here’s #2 (or should that read #32?) from my have-been read queue.
But first FUN FACT about today’s book: Author Kat Cantrell’s debut, Marriage with Benefits, won Harlequin’s (you know that big romance publisher’s) first SYTYCW writing contest.
AND that contest happens to be happening again this year right now!*
Ahem. That business aside back to the review:
So I, umm, really liked Marriage with Benefits. I know can fully appreciate its win back in 2011.
Ms. Cantrell knows her stuff—and she knows how to write a really great tension-filled, sparks flying off the page, laugh-out-loud romance. And yet somehow it balances what I would expect from a “chicklit” read with the passion and heat needed for this particular category line from Harlequin. (The Desire® line is one of the sexier/racier category romances offered by the publisher.)
What I took away was a great story and time well spent. The hero and heroine felt real—like real people with real emotions and believeable problems, EVEN IF the scenario was utterly ridiculous. (Pfft! I mean do people really orchestrate fake marriages for other than green card-worthy marriages and then all you want is a sham matrimony with a guy who looks like Ryan Reynolds.)

Yes, anyways, Lucas and Dulciana ‘Cia’ were lovable in their own ways, and they worked better together. Which is win-win because I expected, you know, chemisty and lovey-dovey stuff. Cia is a tough-as-nails kinda girl. All girt and very little of the ‘girly’, which I typically dislike but she actually really likes pretty things: diamonds are a girl’s best friend and all. She also likes talking parrots. Really pretty birds, those parrots are.
And if I’ve worried you about Cia’s attitude please don’t let this turn you off. She comes off exceptionally strong, and she reminds me so much of my most recent review’s heroine, Quinn Davis from The Truth about De Campo. Really I make her sound like a beyotch and she totally will come off in the first couple chapters like a total beyotch, but you know I think everyone has someone like this in their life. Someone who isn’t the best in their social game—like Cia is SUPER AWKWARD and that was refreshing given that she was constantly being pushed in social soirees to uphold her end of the deal which is to make Lucas look good in the eyes of his upper crust, charity-sponsoring social world.
Thankfully like Matteo Lucas is an easy personality to swallow. He’s a laid-back, cowboy-type hero. While he emulates the cowboy, he isn’t all talk and is quite the charmer. IRL we would totally get along (I mean it would be me – clothes, but we’d get along. *nods*)
Yet the ending through me for a bit of a loop…
I can’t really put my finger on it, which totally makes me sound unprepared—though TBH I usually am when it comes to these off-the-cuff reviews.
It’s just that Cia and Lucas kinda just fell in for the long run…and I don’t know. I think the timeline threw me off as well. The story covers about the first 3 months of a 6-month marriage of convenience contract, so I immediately knew there would be time skips. The time skips were marked by social occasions that the “fake” socialite couple would attend to keep up the appearance of wedded bliss, but it felt forced a bit. Like sometimes I realized a time skip happened—fast forward a few weeks or even a month and there would have been a problem that felt unresolved, and I wondered how it kind of continued on for that time without being resolved.
I’m being Super vague, but I don’t want to spoil the story too much for my own hang-ups. Small as they might be, hang ups nevertheless. I say this as a plural because I also didn’t really like the ending and there was a SPOILER! … right here. –> death
—not the sort you’re thinking either. Trust me. We’re talking romance and HEAs (or HFNs) here, readers. Anyways. There’s that and the ending itself along with the pacing that don’t entirely make this a perfect star read.
But perfection is old news and despite the VERY minuscule problems (IMHO) I wholeheartedly recommend you purchase this book. Kat Cantrell is an author to watch out for…and if at the very least pick up this book in order to read Lucas’ brother, Matthew’s story, Pregnant by Morning. (Because, yes, pregnancy can happen that quick…can it? –runs off to do google search-)
Oh yes, my verdict: