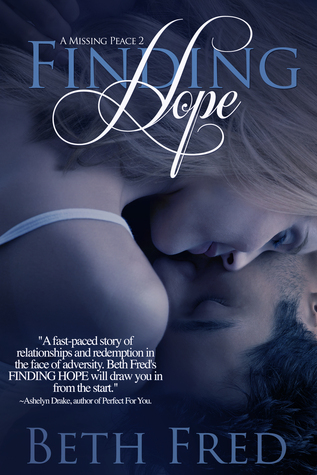 I haven’t read any YA this year, so far. I mostly stuck to romance, staring adult characters and, in some cases, more adult themes…not that YA can’t get a racy. It can. I just don’t necessarily expect erotic levels or super descriptive sex scenes from more mainstream titles.
And I didn’t get crazy sex scenes or anything over-the-top from Beth Fred’s Finding Hope, but I did get a really fantastic story and amazing characters. Abrahem/Abe was portrayed realistic. I mean I didn’t expect this guy to fawn over Kailee, but he was also a red-blooded young adult who wasn’t oblivious to his desires… So where he was the level-headed one at first, Kailee was so messed up but honest and innocent it was pretty sweet!
I LOVED Kailee. I don’t even care how she was probably portrayed in Book 1 when Miriam, Abe’s sister and Kailee’s sorta nemesis. Like I said she was a mess. A drunken, crying mess when Abe first meets her. Her racist slurs initially put me on edge, but Abe slurred as well and though I was uncomfortable, their characters arcs polished their racial slips as they began to understand the damage race and culture and geography can cause when handled without more knowledge. I mean every time Abe had to explain that he wasn’t a “raghead”/Muslim made me shake my head, half in amused annoyance and exasperation for the poor guy. Who goes around assuming someone is part of a religion? That’s just…wrong. Asking mostly never hurts. Isn’t that why Canada, the U.S. and some parts of Europe are toted for their freedom of speech?
I’m blabbing but my point is Abe and Kailee are kids who begin to nurture a relationship around a pre-established linguistic approach to the racial changes occurring in their Texan town. My appreciation for our right to freedom of speech aside it was hard for me to read those parts, but it’s also just as hard for me to listen to kids (and some seriously uneducated adults) call each other the “N” word on the bus.
So I liked the story. It wasn’t even the mystery subplot, per say, although I hadn’t been able to figure it out and my guesses were actually duds (spoilery hint: I thought Carissa, Kailee and Jackson’s mother had something to do with it and that Jackson used her name for the password). It could have just been a contemp romance and I would have eaten it up.
In Finding Hope Beth Fred writes believable characters that easily outshine the plot. The dialogue, character motives and the reactions didn’t always sit well with me, but it got me thinking that the fluffiest dialogue and characterization doesn’t always tell it straight even if it makes it all pleasant to read.
True Kailee and Abe are both a little rough around the edges, and there are other main characters who’d said and did things I had seriously questioned… Yet the world’s a whacky place and I would have hated the novel to be told through a pair of rose-tinted glasses given the tone that was set from the start.
Yes, the conclusion to Finding Hope was a bit cheesy, but after the up and down roller coaster Kailee and Abe had I loved the time skip epilogues. Admittedly I swooned when Abe gave Kailee all those marked up list of schools he’d researched, marking the ones that had a biology degree for him and a fashion-related program for her. What a dream boat.
SO I read this series out of order. I’m going to have to go back to Caleb and Miriam’s story in Book 1. If anything I think it has softened me up for Miriam and Caleb who were a bit abrasive in this second book. Also I’ll be more than happy to read a bit more about Kailee and Abe, even if they aren’t together in this first one yet…
My verdict: