Skip to content
BOOK REVIEW:
Oops! A Pack of Werewolves Got Me Pregnant! 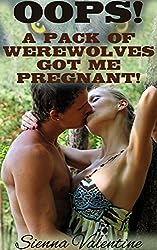 I signed up for the Kindle Unlimited program for the excuse of grabbing some BBW erotic romances, so expect more reviews from this niche genre. Okay I judge books by their cover, but in this case I was lured in by the title. I mean just pause and read that title again.
True to its title, the plot was about a pack of werewolves who impregnate the heroine. The story starts with Liz, our heroine, who is actually a lesbian. Or so she thinks until she bumps into three wolves during her outdoor camping getaway with her latest girlfriend, Tally. You see Liz thinks Tally can be sorta a slut, and that makes her more of a bisexual because the other girl just wants sex… This already endears me to the heroine. *sarcasm*
Anyways, Liz is separated from Tally when she goes off on a hike in the woods alone where she bumps into said pack of wolf shifters and they sorta come on to her. Surprised that she’s curious about their “perfect” male forms, Liz denies herself the company of being escorted back to her camp by these wolf-y men.
She gets lost, of course, and who comes to her rescue but the same wolves she denied. Well, actually the pack leader out of the three; some guy named Sarl and his pack mates/minions, Cadon and Argus. And she’s lured away from the camp to their little cave where the three guys convince her that she doesn’t need to be a lesbian in order to avoid the ridicule of men…
I don’t even care if you’ve never had sexual relations with a male, Liz seems to know a lot about sex given her rendezvous with Tally that I sorta thought it stupid of her to have sex with three men—err, werewolves—because 1) they could have STDs, or fleas, and 2) she could get pregnant.
But we KNOW #2 happens because that title gives the plot away. Also it robs you of the pregnancy itself. And I’m not sure which one was more offensive, the fact that she let random guys have sex with her and basically fuck her
OR that they admit to visiting her gf, Tally while she was lost in the woods and giving her the same experience:
“I don’t think your lover Tally is in any shape to come looking for you,” [Sarl] said.
“Wait, what? How do you know about Tally? What’s happened to her?”
“Nothing that hasn’t just happened to you,” I hear Cadon growl with a guffaw.
“What?” I’m so confused.
“When you left us earlier, we knew right away you took the wrong path. So the three of us headed to your camp to check it out.”
“That’s where we met your little friend Tally,” Argus says.
“Gotta say, that girl is a bit of a slut,” Cadon added with a laugh.

I dare you to tell me that’s not creepy.
Also that woman on the cover is not even curvy. Misleading much.
All in all, Sienna Valentine’s Oops! A Pack of Werewolves Got Me Pregnant! was at least thankfully short. The sex scenes weren’t terrible, and Liz could be pretty funny. But the men were creepy and weird, Liz needed to stop slut-shaming, and I really couldn’t imagine what would happen if the story had continued…
My verdict:
✮✮

2 thoughts on “BOOK REVIEW (34): Oops! A Pack of Werewolves Got Me Pregnant!”