For L I was choosing between two similar movies: Limitless and Lucy. In the end I decided to stick with Scarlett Johansson and Morgan Freeman, and I can’t say I regretted entirely.

Lucy was an interesting movie. I can almost see how the writers might ahve first gotten the ball rolling with the script: “What if we used more than 10% of our brain?”
It expands on this speculation and we get all these theories of the endless possibilities of using our brain
I personally don’t even know if that theory is true. Do we actually only use a fragment of our brains?
So the movie was entertaining, and I really loved how easily Scarlett stepped into Lucy’s heels. I mean, on the one hand you see how weak and human she is in the beginning and then you watch her change and slowly lose her humanity even as she gains all this godly knowledge.
At one point she’s asking Freeman’s professor character–I forgot his name–what would happen to her at 100%, and I thought that was a ridiculous question because I thought she had all this knowledge…
Unfortunately this movie was not nearly as great as it could have been. It had the capacity, but it was bogged down with the lectures that might have seemed intriguing at first but slowly became annoying and repetitive as the movie went on.
Also I didn’t really like the whole thing that was going on with the Korean mob villains. I get why they were there. They had the motivation, but it would have been more interesting if they disappeared after they served their purpose at the start of the movie.
Also what happens when someone else takes all those drugs and pulls a “Lucy”? How would anyone stop this from happening to someone else? I mean Lucy was sorta had a moral compass narrowed on the good side, but what if some really twisted sicko decided to go on an immortal rampage for 24hrs?
So Lucy is God…or a god by the end. I don’t mean to be blasphemous, but that’s what it seems like: she’s everywhere and nowhere in the end. A transcendent being who also has the capability of becoming quite immanent, too.

She’s essentially an immortal and no longer needs to reproduce to copy her knowledge to subsequent generations–she IS knowledge.
Still riddle me this, Lucy, how could you have went into the past and not technically been in two places when you were born? Wouldn’t they mean she ceased to exist… Cause she’d have two timelines that meant and then imploded and destroyed her existence…
Also what kind of daughter is she? She couldn’t pop in and spend some of her last 24 hours with her mom? Shame on you, immortal Lucy.
Gosh. My head hurts now.
All in all Lucy wasn’t an awful movie. At the very least it’s fast-paced, and I liked Lucy’s powers so props to that. And speaking of powers, I thought I would have loved to at least unlock 20ish% of my brain to avoid feeling pain. 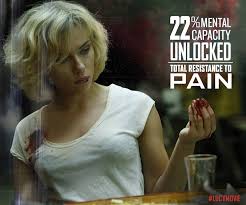 But then I realized that that would be a problem. I mean I could technically get hit by a bullet, or lose a limb and I wouldn’t even know it until I looked down.
What if someone plucks my eyes out and then what? How do I know I don’t have a hole in my stomach or something?
I guess this means I also am immune to diseases for wounds that I’m unaware that might be festering with evil bacteria. Because at this point Lucy isn’t an immortal yet… So couldn’t her wound be infected?
Just sayin’.
Interesting fact though. There are people born with congenital insensitivity to pain. I watched a snippet of a documentary with a mother whose daughter doesn’t know when she’s in pain and that causes a strain on the family because pain is usually your body’s indicator that something is wrong. You’re missing that, and you’ve got big problems.
There’s a reason pain is bred into us. Our ancestors’ gift is all about survival of the fittest. That’s why you and me are here today.
Would you like to gain the ability to feel no pain? Let me know. 🙂