Skip to content
BOOK REVIEW:
Shadow of a Spout 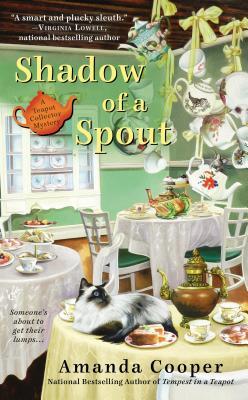 And here’s Book 2 of the Teapot Collector Mystery series from author Amanda Cooper!
I already mentioned how much I loved Book 1 here, and now I’ll tell you how much I really liked Book 2 as well.

Shadow of a Spout takes place outside Gracious Grove (or GiGi for short) where the first story took place. Yes, Sophie Taylor, her grandma Rose Freemont, and her grandma’s long-time ‘frenemy’, Thelma Mae Earnshaw, are in Butter Hills, a neighbouring town where a couple new characters are introduced and another murder mystery is giving them a run for their…err, teapots. Also there’s more sinister finger-pointing–which will confuse the heck out of you up until the end.

I think I’m more amazed that the author makes some of these killers so sympathetic. She’s got a knack for that!

Aside from the murder, I figured out some other relationship connections. Like who likes who, who hates who, etc. So there were some anticlimactic parts, though nothing that seriously made me want to drop the book.

I also liked the pacing. I’m a sucker for time-constrained plots–so think 24 (…only I watched like a season of Jack Bauer before I moved on). In Shadow of a Doubt Sophie, her Nana, Rose and Thelma are stuck in an inn waiting on the homicide detective on the case to give the A-OK and send every visitor on their way home. But Sophie’s grandma is a suspect and Sophie is determined to clear her name for good, just in case anyone still doubts the octogenarian.

Sophie is even more nosier in this book. I should be used to amateur sleuths since they’re really the core of cozies, but it’s always hard to accept of their boldfaced-ness. Mostly because I wouldn’t do what they do. Murder usually triggers the flight response in me. Also I mean I would really hate someone like Sophie if I were a killer…or you know equally suspicious about unsavory secrets.

Of course it’s hard to hate Sophie because all she wants to do is help her grandma. Still I’m surprised someone didn’t flip her off.

Oh and there’s more Sophie and her crush, Mr. hottie-old flame-professor Jason. Unfortunately they still haven’t acted on a date, let alone confessing their feelings (or at least Sophie’s feelings since Jason doesn’t get a POV).

But who reads a mystery for a romance…? *blinks innocently*