It’s April A-to-Z month! Interested in signing up? Unfortunately it’s too late. I know! But even if it it, check out the 1500+ bloggers signed up and striving to complete this month-long challenge. They need YOU to cheer them on!

For my ‘R’ movie I chose Raising Arizona. Again, the logline intrigued me – ex-cop + ex-con + baby they steal = a very intrigued writer. Also Nicholas Cage and my love-hate-like for him. 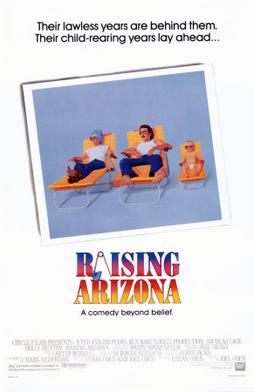 My humor must be broken as I didn’t find it funny as nearly as jaw-dropping, reality TV weird. I definitely laughed, but I also scratched my head, and sighed and gaped (*ahem*dudeinneedofashowerblowntobits*cough*). Off to chopping!

Inciting incident: H.I. and Edwina “Ed” meet for the first time while Ed processes H.I. for jail. They eventually get married and try expanding their family of two, only Ed learns that she’s infertile (and the chances of her having a baby are slim).

End of the beginning: Ed and H.I. hear news of the ‘Arizona quintets’ and they decide that couple, Nathan Arizona and his wife, Florence don’t deserve all that children. When H.I. goes into the nursery to steal a baby, he has second thoughts because they’re so cute and innocent, but Ed locks him out of the getaway car and H.I. makes a decision to grab a baby, Nathan Junior or ‘Junior’.

Pinch point #1: H.I. has a premonition-dream of the evil marksman/huntsman/outlaw bounty hunter, NAME. But Ed’s happy with Junior and they are ready to start their lives…as soon as H.I.’s prison-break friends, Gale & Evlene make themselves scarce and stop make their trailer home a pit stop/hide out from the police. Meanwhile Ed is seriously wanting the luxuries of family life, and she invites H.I.’s foreman/boss at metal sheeting job to dinner with his wife, Dot and large family. When H.I. starts to panic to his boss about F/T dad, the boss suggests they swap wives. H.I. goes ballastic and punches boss-dude in the face, breaking his nose and losing his job as well as Ed’s favor.

Pinch point #2:  His jail-break prison friends are there to comfort him, since Ed’s blocking him out. They give H.I. the idea to act as a trio and pull off bank robberies until they’re rich or they get caught by police. Sold on the idea, H.I. is ready to leave while Ed is out shopping in the city for Junior. But before he runs away, H.I. answers the door to his former boss, and he faces a ‘formal’ (informal?) firing as well as the boss-dude’s been doing his research and he knows H.I.’s ‘son’ is actually the missing Arizona toddler. H.I.’s friends overhear and are already on the move; they want the $25,000 ransom for the rescue on their way to robbing the bank. Meanwhile, the evil bounty hunter pays a visit to grieving quintet dad, Nathan Arizona.

Crisis: H.I. tries to fight his prison friends for Junior but he’s eventually outnumbered and tied to a chair while the friends make a break with Junior in tow. When Ed returns to free H.I. she’s devastated but determined to see Junior is safe and back with his family (she’s finally come down to realize she’s a former cop and she’s doing unlawful and immoral things).

Climax: The prison friends have one more stop to make – the bank they wanted to rob with H.I. Now a two-man job, they head in and they clean the bank out and run off with the money and without Junior. When they realize they left Junior behind in his carrier, they try to turn back but the pressure-sensitive canister that the teller snuck into the money bag bursts and they nearly crash into Ed and H.I.’s car. Ed and H.I. locate his friends and realize they’ve lost Junior and as they make their way to the bank, Ed and H.I. see the bounty hunter grabbing Junior. A lot of craziness happens – H.I. gets the snot beaten out of him, and Ed has Junior safe and sound, and finally H.I. manages to trick the evil, super strong bounty hunter before he deals the killing blow.

Resolution: Ed and H.I. sneak Junior back into the Arizona family’s nursery, and they’re caught by Nathan Arizona who puts two-and-two together, figuring them to be the toddler-nappers. Nathan Arizona forgives them and even gives them relationship advice to ‘enjoy each other’ even if they can’t have children of their own. H.I. and Ed decide to sleep one more night on their potential divorce, and that night H.I. has another dream, only this time it isn’t a nightmare involving the evil (now dead) bounty hunter. He dreams that he and Ed are celebrating a family reunion as an older couple with their children and grandchildren…does it happen though? Is it another premonition? Well, sadly (maybe not sadly), there isn’t a sequel and there probably shouldn’t be, especially now. ROLL CREDITS.