It’s April A-to-Z month! Interested in signing up? Unfortunately it’s too late. I know! But even if it it, check out the 1400+ bloggers signed up and striving to complete this month-long challenge. They need YOU to cheer them on!

True story, I haven’t watched an X-men movie since X-Men Origins: Wolverine opened a years ago. Long, long time. I’m not really counting Deadpool because…well, not all of the X-men could make it to the film (blame the budget as DP says). So with Apocalypse hitting theaters soon, here’s X-Men: Days of Future Past to make up for the withdrawal of my favourite mutants. 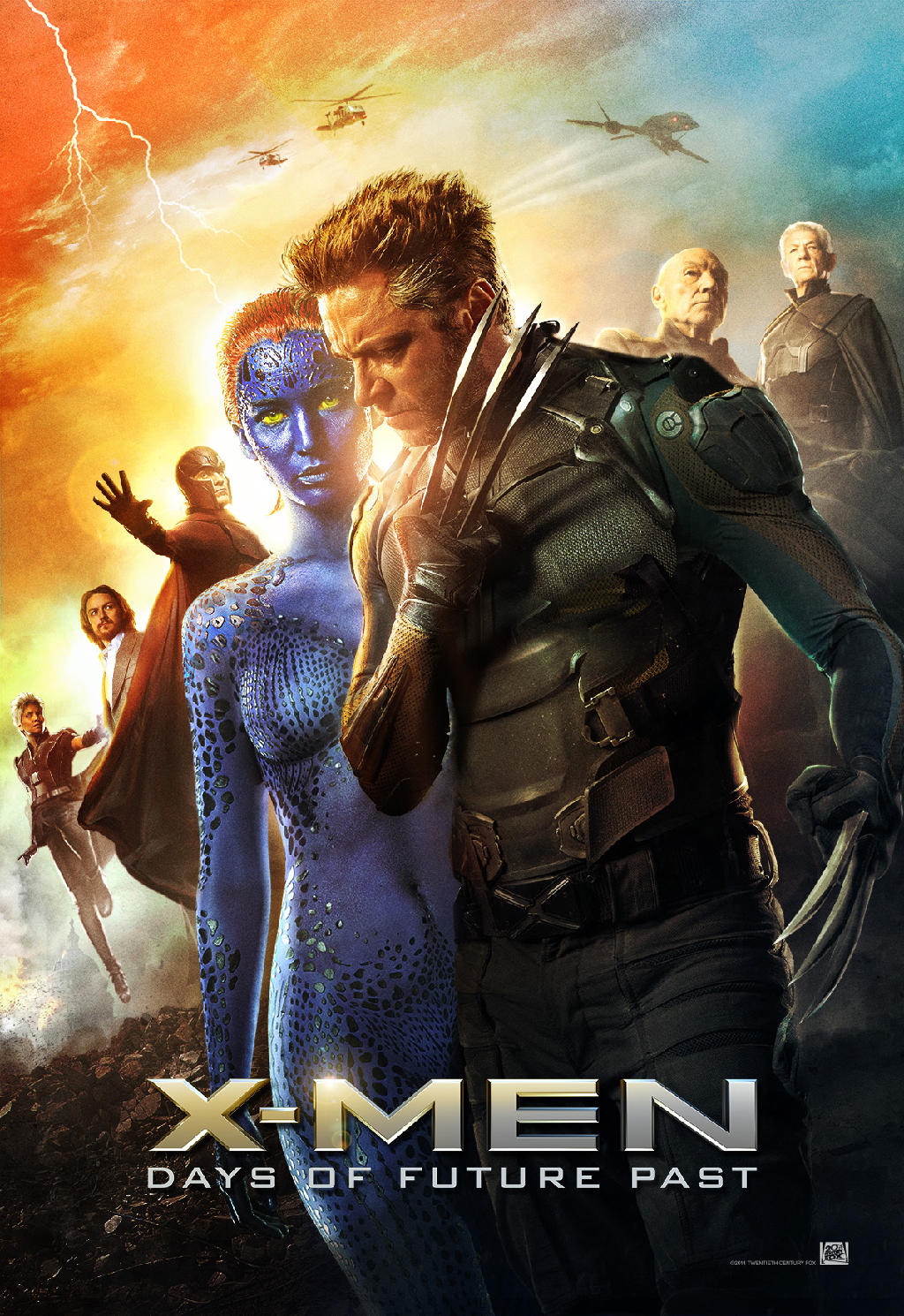 Let’s chop it up:

Inciting incident: Okay the movie jumps into action pretty quickly – we have Kitty, Bobby and some other mutants (i.e. Sunspot, Blink) who are battling (and losing and dying) to these Sentinel things. Suddenly we see Storm, Wolverine, Charles and Magneto all together and they meet up with Kitty, Bobby and co. Turns out they all didn’t die and Shadowcat/Kitty has these new “special” powers that allow her to transport people into the future. To beat the Sentinels they’ll have to go back in time and shut them down before they’re facing this bleak future where mutants (and those with mutant genes) will be shut down by the Resident Evil-like Nemesis bots/Sentinels.

End of the beginning: Wolverine steps up and decides to head back in Charles’ place, since he’s able to recover faster it’ll be harder to kill him. So Wolverine is ready to transport back 50 years ago to 1973 with Charles’ warning about his younger, more hopeless self.

Pinch point #1: Wolverine heads to the X-men HQ/school to find the Professor’s younger, cynical version and he’s convinced him and the young Beast/Hank to help out with . Meanwhile Mystique is saving recruits from Dr. Trask’s evil experimentation on mutant genes for his Sentinel project (this guy x Mystique = catalyst to the apocalyptic future). They have to free Magneto/Eric too in order to help stop Mystique from killing Dr. Trask and getting herself caught – her DNA is the key to making the future Sentinels unstoppable mutant-killing machines. Wolverine, Hank, and Charles make one last stop at Quicksilver/Peter’s home as they need him to help bust out his father from the Pentagon (on charges of assassinating President Kennedy who was actually really a mutant – or who had mutant genes; Eric didn’t really do it though some humans framed him when he was trying to actually save the president). Anyways, they free Magneto and with his work done a teenaged Peter/Pietro/Quicksilver heads home while the rest head off to the Paris treaty signing to end America’s involvement in the Vietnam War. It’s also where Mystique historically kills Dr. Trask and gets herself captured and experimented on for her genes.

Midpoint: The Wolverine, Magneto, Charles and Hank arrive on time: Mystique has just opened a can of kick butt in order to get to Dr. Trask. Saving her from getting attacked and captured and also giving Dr. Trask time to run away, Magneto tries to kill Mystique and Charles stops him or diverts the attack. A kerfuffle happens and Wolverine is out of commission because his body jerks between future and past and there’s a lapse in his memory for a few minutes. He’s essentially otherwise useless while mass hysteria occurs in the public with Hank going Beast and attacking/distracting Magneto from killing Mystique.

Pinch point #2: Magneto runs away when he can’t find Mystique and Charles, Wolverine and Hank are left to reconnaissance. They head back to the school to use Cerebro (Cerebra) to locate Mystique before Magneto attempts to kill her again. When the machine malfunctions and Hank heads off to fix it, Charles feels like crap and doesn’t believe he has the ability to use his powers anymore. It takes a pep talk from Wolverine to get him to try again once Hank has it going. Charles locates Mystique and tries to talk to her, but she tells him off and continues her journey to Washington for the reveal of Dr. Trask’s approved Sentinel project and the eight prototype robo mutant-destroyers. Magneto busts out his outfit and his helmet to help ward off Charles’ powerful mental manipulation and he decides to invite himself to the White House party too – his goal being to kill Mystique and the President (really this time!) and his men, Trask too, in public to make a statement to the non-special humans that superhumans are basically the new gods. (All bow before Magneto. I wouldn’t mind being a Magneto high priestess… No human/animal sacrifices though).

Crisis: Under the rubble of Magneto’s attack, a helpless Charles lies and waits to die (or for someone to help). But Hank and Wolverine are getting their butts handed to them by Magneto who impales Wolverine and encases his body in metal wiring and flings him off into a watery demise (but since he’s immortal, I guess Logan will just keeping dying over and over again – a drowning beauty, hehe).

Climax: Back in the bleak future the Sentinels have found the remaining X-men and one-by-one starting with Storm they’re killed. It’s looking hopeless with Wolverine’s unconscious body, Charles unable to do much and Kitty trying to hold the link to Wolverine in the future and past. AND back to the White House -> the President and his company have run into his bunker in the Oval Office. Magneto rips the bunker out of the President’s Office and launches it out onto the White House’s front lawn. Then with the world watching, Magneto prepares to kill the President and all of the men with him including Trask. But out of nowhere Mystique catches him off-guard and ripping off his helmet, she leaves him to Charles’ strong mind-control. Freeing himself from the rubble, Charles is helped up by a recovered Hank/Beast. Mystique then turns to kill Dr. Trask. It takes Charles pleading with her one last time for her to drop the gun and leave. Magneto is released from Charles’ mind and he too leaves to go do Magneto-things. Just when the Sentinels are powering up to blast Kitty, Wolverine, and Charles, they disappear and…

Resolution: Wolverine wakes up in the future (much like he did when he woke up in the past) and he sees that he’s back in his room in the X-men school. It’s the start of a new day and students are bustling about, and Wolverine is surprised to see Hank/Beast and Kitty and Bobby (and Rogue who is not dead – she died in the bleak future version) and – GASP! – Jean Grey and, *grumble* kinda, Scott and of course the Professor. No one is aware of the adventures/lengths/hurdles he’s leaped/jumped/dived through to save everyone and secure this peaceful future, save for Charles who has his suspicion… It ends with Wolverine needing the Professor to catch him up to speed with this new future (as he doesn’t know what’s changed with the future, now that Mystique didn’t kill Trask). The final image is of Wolverine being saved in the past from his watery (temporary) grave by a disguised Mystique on board with coast guards which will start Wolverine’s transformation into getting his famous metal claws.

Was anyone else a little annoyed with how this movie turned out? I don’t know what I expected. For it to make more sense. I mean, arresting Trask seems like a waste of time. What would happen if he decided to bust out and try his Sentinel program again? Just sayin’…