As part of my Greek mythic figures, places, and things theme, my “M” post stars a well-known villain of Greek mythology, Medusa. But just who was she before?

Is this the real Medusa? 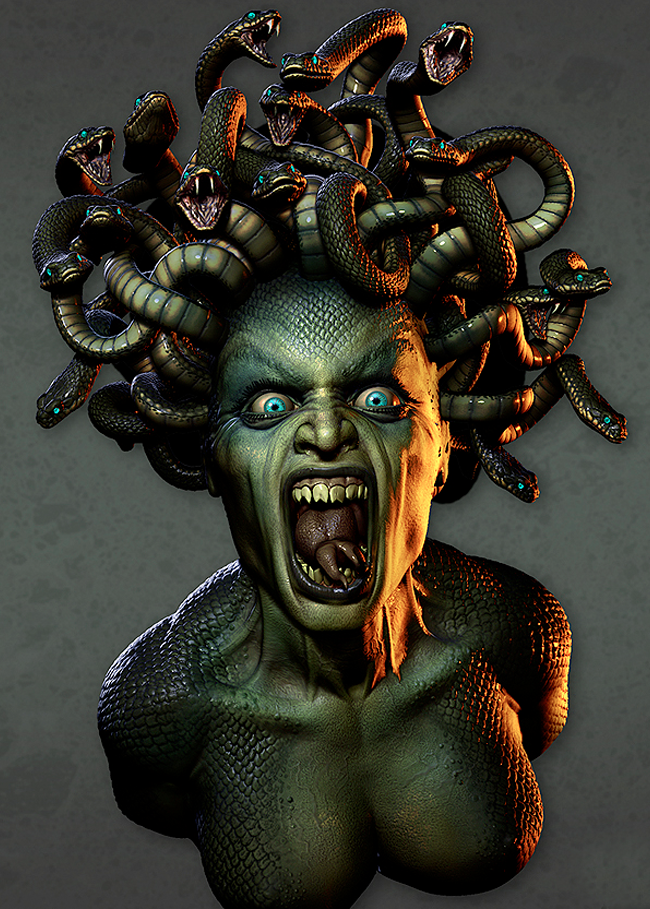 Or is this the real Medusa?

Before I start asking the real Medusa to “please stand up”, let me tell you about her.

Medusa was 1/3rd of the Gorgons, a trio of winged-daemon sisters. A “daemon” in Greek is not the same as “demon” in English, so don’t be confused. A closer translation of daemon would be “spirit”.

Back to Medusa, she was one of the Gorgons. The Gorgons were the daughters of Echidna and Typhon, the mother and father of all Greek mythological monsters (i.e. Cerberus).

Whatever her parentage, Medusa, like her sisters, was purportedly hideous, their ugly faces coupled with the writhing snakes for hair. And, of course, their piercing gazes would turn observers into stone.

Also, unlike her sisters, Medusa is said to be a mortal. Hence, her death…but we’ll get to that later.

Some sources state that Medusa used to be a beautiful woman; a celibate shrine maiden to the goddess Athena, but that she was wooed by Poseidon. Forgetting her vows, she marries Poseidon, OR she goes as far as to couple with him in Athena’s shrine. Either way, Athena is pissed and she curses Medusa to becoming the ugly she-monster we know today.

Now to her death…

The demigod son of Argive princess, Danae, and Zeus, Perseus’s birth was foretold by an oracle of Apollo’s to Perseus’s grandfather, then king of Argos, Acrisius. Acrisius was also told that his death would be at the hands of his grandson.

Fearful for his life, Acrisius takes his maiden daughter and traps her in a doorless tower. The tower room had one small window – this was enough for Zeus to penetrate the barrier as a golden beam of light and impregnate Danae. (Persistent doesn’t even describe him. This is just crazy attempt to put your god seed in every woman.)

Travel by chest (everyone’s doing it!):

Seeing the light, Acrisius has the tower walls broken down and he finds Danae holding her infant son. Angry – but supposedly not enough to kill his grandson – Acrisius has Danae and baby Perseus shut up in a chest and tossed out to the sea. They eventually land in Seriphos, ruled by King Polydectes.

It was the King’s brother, Dictys, a homely fisherman who saved Danae and Perseus from their chest prison. Polydectes falls in lust with Danae, and he’s only stopped by Perseus, who has now grown into a strong, young man. Devising to claim Danae, Polydectes sends Perseus off on a mission: fetch the head of the mortal Gorgon, Medusa.

The Hunt for Medusa

Perseus goes on this aimless search, finally despairing before he’s visited by his divine half-siblings, Athena and Hermes. They offer their assistance – and I know Athena’s beef with Medusa, but Hermes? Anyways, they give Perseus godly gifts: Hermes passes him his winged sandals and the sickle used by Zeus to castrate his monstrous father, Uranus, and Athena hands him her shield. In some versions, Perseus also gets an invisible helm (a gift from Hades or the Graiai).

Perseus still needs to find where the Gorgons live. They seemed to want their privacy, so much that Perseus has to get the help of sea hags, the Graiai.They shared a single eye among themselves, and Perseus robs them of the eye.

They tell him the secret location, and Perseus dons his helm of invisibility. Sneaking on the sleeping Gorgons, he uses the sickle to slice off Medusa’s head.

I know there’s the whole using-the-shield-as-a-reflective-surface move, but if Medusa turned to stone, it would make it hard for Perseus to chop off and carry her head to King Polydectes.

The other Gorgon sisters, Euryale and Stheno wake to avenge their sister, but Perseus uses Hermes to out-fly them.

Back in King Polydectes’s island kingdom, Perseus learns from fisherman Dictys that Danae refused to marry pushy Polydectes and he forced her to be his handmaiden as punishment. Angered, Perseus hunts down the idiot King. Pulling Medusa’s head out, he “flashes” Polydectes. The king and all his loyal courtiers – enemies of Perseus – are turned to stone forevermore.

I think it’s karmic. Medusa wasn’t a threat; Polydectes had her murdered, and now he’s a block of history. Perseus should have shattered his arse…

MORAL: When someone says no, they mean no. Don’t be stupid. Don’t drag other people into your drama.

Check them out when you have the time. You won’t be disappointed if you’re a myth buff!