As part of my Greek mythic figures, places, and things theme, my “Y” post shines a light on the beauty and fatality of youth, especially mortal-blooded youth.

There’s something about being beauty that goes hand-in-hand with tragedy in Greek mythology. There’s Medusa, who was supposed to have been beautiful… And there’s Narcissus, who was so beautiful he was ended up being cursed to fall in love with his reflection and drown in his obsessive love.

There was a goddess of youth. There she is above, Hebe, the goddess of eternal youth and also the ex-cupbearer of the gods. She used to personally serve them ambrosia and nectar, the drink and food of the gods.

But the kind of youth I’m talking about is tragic beauty and youth that usually follows characters who are both young, beautiful and talented. Hubris is a big part of the tragedy, but sometimes it feels more like their beauty is the fire that’s attracting the moths – in this case meddling, mercurial gods.

So let’s take a gander at the stories of some tragic, gorgeous lovers from Greek mythology.

Adonis was supposedly a transplant deity from Phoenicia. He was a beautiful mortal youth in Greek mythology. Adonis was the incest product of his mother, Myrrha and her father, King Theias. Myrrha might have loved her father a bit too much… She seduced him without his knowing who he took to his bed, but when he found out, he had intended to kill her.

Myrrha was saved by the gods when her prayers to be transformed and hidden forever were heard. She was changed into a myrrh tree. Pregnant, she bore Adonis this way.

Then Adonis was found by the goddess Aphrodite, and (not entirely maternal) she pawned him off to be reared by Persephone, Queen of the Underworld, goddess of spring.

Adonis grew to be really handsome, and so Aphrodite came a-knocking, hoping to sweep him off his feet and bring him over to living with her. But Persephone supposedly fell in love with her “adopted” son, and she wouldn’t part with Adonis, so the two goddesses fought like cats in heat.

Zeus broke it up by playing schedule-master.

Zeus had Adonis moving home between Persephone and Aphrodite; for one-third of the year he lived with Persephone, one-third with Aphrodite, and the other third he could choose who he wanted to stay with…and Adonis liked Aphrodite more, so he spent two-thirds of the year with her. In another variant, he chose to spend one-third “being at his own disposal” (source).

Adonis died being gored by a bull, purportedly sent by Artemis who was avenging the death of Hippolytus, Theseus’s hunter son, who supposedly decided to stop worshiping Aphrodite and live a chaste existence with the worship of Artemis. Aphrodite killed Hippolytus, so Artemis killed Adonis. Another variant mentions Artemis being jealous of Adonis’s skill as a hunter and killing him for it.

And sometimes it isn’t even Artemis’s fault. But Ares, who was Aphrodite’s lover and who jealously sent a bull to gore Adonis.

Now Adonis was so beloved by Aphrodite, he was either immortalized into a flower (as some mortal lovers are by their god-du-jour) or Aphrodite begged Zeus to have Adonis pull a Persephone, where he spent half the year in the Underworld and half the year in the world of light and the living. But to recap, Helen of Troy was not of Troy initially, and I don’t know if she ever really was. She was a beautiful, and some of that beauty is attributed to her being a demigoddess as she might have been Zeus’s daughter.

She was married to Menelaus, a Spartan king, who won her by drawing straws (Odysseus’s idea). No clue if Helen was happy to be with Menelaus, but she was abducted by Paris of Troy who got the go-ahead from Aphrodite when she promised him the most beautiful woman as his wife.

But what happened to her when the long-drawn Trojan war ended?

There are many endings to her tale.

She either stayed by Paris’s side, and during the war, she had his children – none of them surviving past infancy. After she married Paris’s brother, but then when her husband came for her, she plotted with him to kill Paris’s brother and the couple fled to Sparta together.

In some cases she arrived to Sparta alone to beg for her husband’s forgiveness, and he planned to cut her down for her unfaithfulness, but she disrobed and her beauty disarmed him – literally. They reconciled, and she lived out her days as Queen of Sparta once more.

She might have lived out the rest of her life in Egypt, where Menelaus may or may not have fetched her.

Or maybe she’s in the Underworld, supposedly where she followed Achilles…perhaps to atone for her part in the Trojan war (#notherfaultatall). 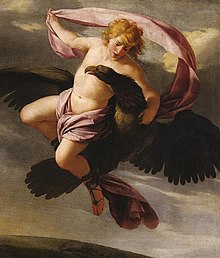 Coming around full circle here to wrap this post up, we have Ganymede. The beautiful mortal prince who caught Zeus’s eye (in a surprise twist, because HELLO, that Zeus was pretty much all about the nymphs).

Ganymede was a Trojan prince, and the son of King Tros, the namesake of Troy itself.

Ganymede was spied by Zeus and the king of Mt. Olympus sent down an eagle to pluck the boy from the mortal realm. And since Ganymede’s father mourned his abduction, Zeus decided to compensate Ganymede for “two storm footed horses” (source) sent along with Hermes.

Ganymede went on to replace Hebe as the cupbearer of the gods. In some cases Hebe was either leaving her post to marry Hercules with the blessing of Zeus, or she tripped and split her robe, baring her breasts to Apollo, and he was outraged enough to have her fired and replaced.

Now Ganymede was liked by all gods up on Mt. Olympus, except for Hera. She had beef (or nectar) with him because he was another lover of Zeus, and one that was freely parading around in front of her.

Zeus, wanting to appease Hera, goddess of nagging, waved his hand and transformed Ganymede into constellation Aquarius, the water-barrier. (He also probably found a way to visit his lover in the sky, I’m sure. Zeus is crafty when it comes to his extra-marital affairs.)

MORAL: Consider marring your face if you’re sucked into a Greek mythology. Or just hiding out for the rest of your life.

Check it out when you’re free!